Stewart’s Donnybrook Automotive, in Tyler, Texas, understands that your teenager getting their first car is one of the most significant milestones in a parent and teenager’s life. It’s also one of the most challenging times for a parent. The safety of your young driver is of utmost importance. In addition to keeping your vehicles in good repair and car maintenance a priority when it comes to vehicle safety, other areas of safety concerns must be discussed with new drivers.

Cell phones, car technology, and texting and driving are at fault for many accidents, and parents have good reason to be concerned when their teenager starts driving.

Distracted driving is now considered an epidemic, despite being preventable.

Almost every teenager has a cell phone, wants to drive friends in their car, or grabs breakfast/lunch on the go. So, how do you keep your children safe when they start driving?

The statistics and facts around Distracted Driving, especially concerning teenagers, are very serious. Distracted driving is known as “the new drunk driving” and follows a similar thought pattern.

Knowledge is power. Here are some talking points to share with your child. Remember, it’s not about scaring them into doing the right thing, but empowering them with information to make the right choices.

Talking to your teen driver about distracted driving can be a difficult conversation. But it doesn’t have to be. It’s important to remember that teenagers are in a transition period of their lives. Talking to them, person to person can make a more significant impact than a lecture. Young people at this point in their lives want more freedom, so it’s important to be aware of that and find a balance as you talk to them.

Here are some tips for making the conversation easier with your children about driving safety and common-sense precautions when it comes to Distracted Driving.

1. Empower your new driver to feel as though they’re in charge of the situation. That they have the choice to do the right thing. They don’t have to give in to the urge to use their phone or peer pressure from others in the car. Let them know that when they do the right thing, you’re proud of them. That you understand it’s a choice, and it isn’t always easy.

Statistics continually show that, despite knowing the risks, teens do it anyway. So it’s important to help them understand the risks and repercussions in a way that makes an impact.

2. Remove as many distractions as possible before getting into the car. If possible, require that your new driver turn off their cell phone and store it in a place that isn’t accessible from the front seat. If they can’t get to their cell phone, it’s far less likely to be a distraction.

Distracted driving isn’t limited to cell phones. It can also come from friends in the car, eating while driving, playing with the radio, or even doing makeup or hair.

Vehicles these days come equipped with all sorts of technology that easily distracts from driving.

Remind them that all it takes is less than three seconds of distraction for an accident to occur. It’s easy to assume it’s harmless to take your food to go and eat it in the car. However, eating while driving is very distracting, especially for a less experienced driver. All it takes is a spilled drink or a dropped piece of food to cause a driver to take their attention away from the road and an accident to happen.

3. One of The Best ways to help ensure car safety and safe driving is to model driving safety yourself. If you’re using your cell phone, eating while driving, playing with the radio/Bluetooth in front of your child, they’re going to assume it’s ok for them to do the same. And they definitely won’t take you seriously when you tell them not to. Teach your new driver that distracted driving is dangerous by being a positive example.

4. Statistically, accidents involving teen drivers are much more likely to occur when there’s more than one other passenger in the car. Set boundaries for your new driver when it comes to how many friends are allowed in the vehicle.

Set rules and enforce them. If your rule is for your new driver to keep their cell phone out of reach and in the back seat, make sure those rules are being followed. If you find out otherwise, make sure you enforce the consequences you put in place. If there are no repercussions, then there’s no reason to follow the rules. Your teen driver needs to understand that it’s not just their life at stake, but potentially that of other people.

Talking about distracted driving with your child doesn’t have to be difficult. After all, you’re in this together.

At Donnybrook Automotive, we have all experienced what it is like to hand the keys over to our children. We understand the anxiety and concern that parents experience. Check out other blogs on how to prepare your teenager’s car for unexpected and emergency issues. Teach your children to explore other ways to prepare for becoming safe and prepared drivers. Once the topic is open for discussion, your kiddos may just teach you a thing or two to help keep you safer behind the wheel as well. 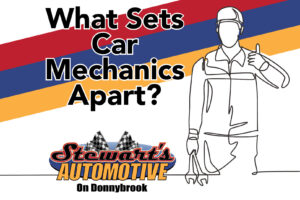 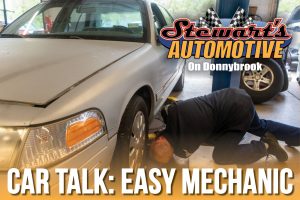 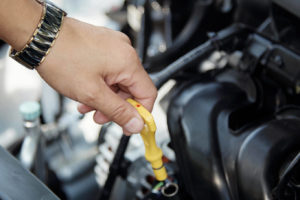 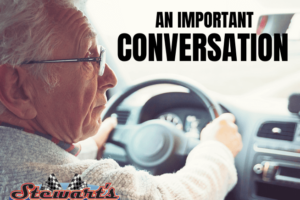 Elderly Drivers: An Important Conversation You Mustn’t Put Off —Ways to Keep it Light. 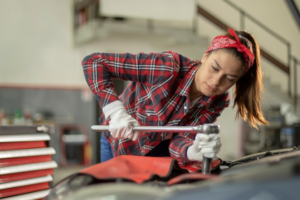